Avery is 14 years old and headed into the 9th grade at Lake Travis High School. She recently attended the Veritas Academy three days a week, and home schooled herself the other two.  This schooling model provides not only an excellent education with a focus on self discipline, but also allows Avery more time for her true passion of dance.  Avery is the youngest of five, with four older brothers.  No surprise then, that at the age of two, her mom searched the Austin area for a dance studio that would take a student still in diapers!  When Avery was 5, Heather O'Hara, with an injured dancer and an upcoming competition, asked her to join the team.  Seven years later, she is still competing strong and loving it! Avery has won numerous awards at both Regional and National Competitions, as well as Judges Choice Awards and several scholarships.  She spends between 15-20 hours a week taking classes from various instructors around the Texas area as well as private instruction from her director Heather.  Avery loves to travel and meet new people.  She has gone to Africa the last two summers, the youngest member of the New Hope Initiative's team, where she conducts dance camps for the girls at New Hope School, in the slums of Kibera, Kenya.  Throughout the year, Avery rents her home studio, and uses the funds to both sponsor a student at the school, and to offset the cost of the trip.  Presently, her future dreams include college, owning her own studio, or perhaps become a dancing missionary!  In her spare time, you will find her hanging in her bedroom hammock with a good book or on the phone with a friend. 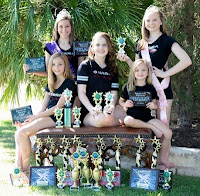 *3rd Overall for "No Strings Attached" (choreographed by Heather O'Hara)
**with "Hit me with a hot note" also getting in overalls!!